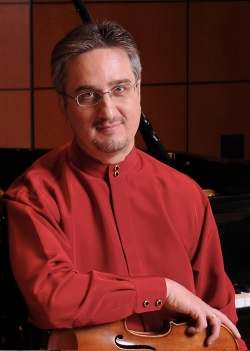 Dr. Mark Neumann joined the faculty of the University of Oklahoma School of Music as viola professor in 2009. A native of Edmonton, Canada, his musical studies took place at the University of Victoria, The Cleveland Institute of Music, and The Juilliard School in New York, from which he earned his Doctor of Musical Arts degree in 1995. His principal teachers have included such eminent violists as Karen Tuttle (Professor, The Juilliard School), Robert Vernon (Principal Viola, The Cleveland Orchestra), and Jaroslav Karlovsky (Prague String Quartet, Czechoslovakia). Other renowned violists with whom he has worked in festival and masterclass settings include Kim Kashkashian, Barbara Westphal, Heidi Castleman, Donald McInnes, Gerald Stanick and Eric Shumsky.

Dr. Neumann’s versatile performing career has included appearances as soloist with the Victoria Symphony, Calgary Philharmonic and Thunder Bay Symphony orchestras in Canada, the symphony orchestras of Big Spring (Texas) and Rome (Georgia) in the USA, the Cusco Symphony Orchestra in Peru, and the Collegium Musicum of Straubing, Germany. As a chamber musician he has performed at the International Performance Symposium in Goiania, Brazil; the Classical Music Festival in Eisenstadt, Austria; the Victoria International Festival, the Banff Festival of the Arts, and the Pacific Rim Summer Festival in Canada; and at the Sarasota Music Festival and the “Academy of Music” at Ramapo College (New Jersey) in the USA. Among the artists with whom he has collaborated in chamber music are Robert Chen, Daniel Heifetz, Peter Winograd and Jose Maria Blumenschein (violin); Edgar Meyer and Milton Masciadri (double bass); Tsuyoshi Tsutsumi, David Geber and Joshua Roman (cello); and David Shifrin (clarinet). Additionally, he has participated in broadcast recordings of chamber music for the Canadian Broadcasting Corporation and for Deutschland-Funk (Munich, Germany).

Dr. Neumann held previous faculty positions as viola professor at Texas Tech University and at the University of Georgia, and has presented numerous recitals and masterclasses in Taiwan, Brazil, Argentina, Canada, and across the USA. He has been a frequent faculty artist at music festivals in South America, including the Vale Veneto Winter Festival and the Santa Catarina Strings Academy in Brazil as well as the Cusco Music Festival in Peru, and was also an invited solo performer at the International Viola Congresses in Adelaide, Australia (2007) and Rochester, New York (2012). Additionally, he was presented as a solo performer at the American Viola Society Festivals in Oberlin, Ohio (2016) and Los Angeles (2018). His first solo CD album, entitled “Romantic Showpieces for Viola”, was released by the ACA Digital label in 2009. Currently, Dr. Neumann performs regularly with the Brightmusic Chamber Ensemble of Oklahoma City and the Oklahoma City Philharmonic Orchestra, and maintains an active schedule as a performer, teacher and clinician in Oklahoma as well as nationally and internationally.