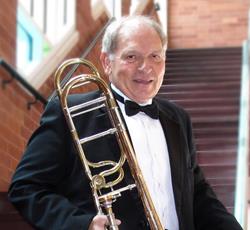 Dr. Irvin Wagner is a founding member of the Oklahoma Brass Quintet, and has been named as a David Ross Boyd Professor. Wagner conducts the popular OU Trombone Choir. He is a member of the Oklahoma City Philharmonic and the conductor for many of that orchestra's pops concerts. Wagner's compositions and arrangements are in demand by many major symphony orchestras and trombone choirs.