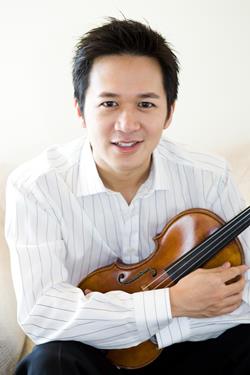 An outstanding violinist with virtuosic brilliance, Gregory Lee is currently Associate Professor of Violin at the University of Oklahoma and Concertmaster of the Oklahoma City Philharmonic. Lee has performed with the Oklahoma Chamber Players, Holmberg String Quartet and is a regular member of the Brightmusic Chamber Ensemble in Oklahoma City.

Before coming to Oklahoma, Lee taught at Tunghai University and National Taiwan Normal University. He has given numerous recitals around Taiwan and was frequently invited as a competition adjudicator.

The Australian-born violinist holds a degree from The Juilliard School, where he studied with Dorothy DeLay and Naoko Tanaka. Later, he received his master’s and doctorate degrees at the University of Michigan studying with Paul Kantor. His success in competitions include the Special Jury Commendation Award of Michael Hill International Violin Competition and winner of the Geelong Advertiser Instrumental Competition.

Many of Lee’s former students have not only been accepted to major conservatories around the US but also been successful musicians, including Richard Lin, 2018 winner of the Indianapolis International Violin Competition.