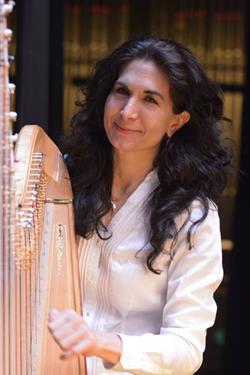 Ms. LeBlanc Germain regularly performs with touring Broadway show orchestras throughout the years, including My Fair Lady, Peter Pan, and Beauty and the Beast. Also with OKC Lyric Theater orchestra which shows include The King and I, Carousel, The Sound of Music, The Wizard of Oz, Oklahoma, Singin in the Rain, Evita, The Producers, A Chorus Line and The Fantastiks mostly conducted by David Andrews Rogers (DAR).

She has also been active as a concerto soloist with orchestras throughout the area performing composers Debussy, Mozart, Malecki and most recently the Hannah Lash Concerto No. 1 for Harp and chamber orchestra with the OKC Philharmonic in May, 2021. Critics praised her performance as providing a “range of color and virtuosic energy which brough sharp staccatos, disjunct shapes and striking contrasts into relief.” (The Oklahoman) or “whose virtuoso work in the famous duet and throughout the opera was simply wonderful” (Opera News) for Bizet’s opera The Pearl Fishers.

As a recording artist, she has recorded movements of Benjamin Britten’s Ceremony of Carols with the Dallas Orpheus Chamber Singers along with the Stephen Paulus’ Three Nativity Carols. In 2010 and 2011, Ms. LeBlanc Germain recorded the William Grant Still Symphonies No. 2 & 3, Symphonies No. 4 & 5 with the Fort Smith Symphony (Naxos label)

As a teacher, Ms. LeBlanc Germain has been at the University of Oklahoma since 1998 where she built the harp program from the ground up. Starting with a dormant department, she found the stolen OU harp, raised funds for two new Lyon & Healy harps, received two more beautiful instruments, added Harp Pedagogy, Harp Orchestral Literature, harp ensemble to the degree program and has graduated several harp students throughout the years. She has also been teaching her two classes of Understanding Music to Non-majors since 2000 and enjoys meeting all types of students who thought they “didn’t like” Classical music.

Ms. LeBlanc Germain has also taught harp at Oklahoma City University (OCU) from 1998 – 2010, University of Central Oklahoma (UCO) from 2000 – 2001 and the University of North Texas (UNT) from 2005 – 2006. She started and directed the Harp Oklahoma Workshop from 2012 – 2020 with other faculty harpists Rachel Starr Ellins, Shelly Du, Julie Smith Phillips and Yolanda Kondonassis. She has taught at Blue Lake Fine Arts Camp and Oklahoma Summer Arts Institute.

Her education consists of starting the harp at the age of 20 after many years of piano, theory, organ and flute. Ms. LeBlanc Germain earned from her Bachelors in Performance at the University of North Texas with harp professor Ellen Ritscher and Masters of Music in Performance with Dallas Symphony Harpist Susan Pejovich. She spent five summers at the Salzedo School in Camden, Maine with Alice Chalifoux and two additional summers at Boston University Tanglewood Institute with Lucile Lawrence.