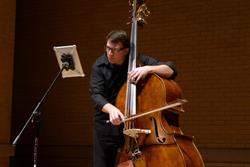 Anthony Stoops currently serves as Professor of Double Bass at the University of Oklahoma School of Music. Since winning first prize in the International Society of Bassists solo competition, he has maintained an active international profile as a soloist, improviser, chamber musician, composer and educator. Stoops has performed as a member of over a dozen orchestras including the Detroit, Columbus (OH) and Toledo Symphony orchestras, and the Michigan Opera Theater among many others, under many of the world’s great conductors such as Sir Georg Solti, Neeme Järvi, Daniel Barenboim, Zubin Mehta, Pierre Boulez and Charles Dutoit. As an educator, Dr. Stoops has given masterclasses and presentations in Europe, South America and throughout the U.S at venues such as the Paris Conservatory, Cleveland Institute of Music, University of Wroclaw, Poland, University of Michigan, University of Belo Horizonte and many others. In addition to his duties at the University of Oklahoma, Stoops serves as Principal Bass of the Oklahoma City Philharmonic. He lives in Norman, OK with his wife and two children.